Asian Games just concluded in Indonesia on Sunday Sep 2, 2018. Held every four years, the games have been a very competitive event where major countries like China, Japan, India and many more participate with two fold objective –

Asian games is unique as it does not see participation from many countries that have modern and advanced infrastructure as compared to the Asian countries. At the same time, it gives a glimpse into the effective cross-region growth in talent and a desire to do more in the world of sports.

It also plays a good source of income for the host country as there is good coverage of the events across a large population sitting in a relatively close timezone. For companies that are focused on Asian markets, this is the event where they pump their marketing dollars (oops Asian currencies I mean).

From last few years, the interest in Sports events in India has really picked up. With multiple new competitions in terms of PL started with IPL, KPL, ITPL etc, the general awareness about sports is tremendously increasing. And with government support through campaigns like #HumFitToIndiaFit – there is more and more interest among people for the sporting events.

With this background, I put together some simple insights in Tableau Public for the historical performance of India in Asian Games. With a legacy starting from 1952, data collection was not a challenge. However, I had some learning curve with Tableau but found it quite inquisitive and interesting to use. Though I found that publishing to the Tableau public library is quite a painful exercise with even small data sets failing to publish. The last running one has been going on for 18 minutes.

Anyway, I have raised a case with Tableau.

Here are some of the insights that I have built. Not adding a lot of commentary along. Just the visuals do a lot of talking. Two types of visuals are here – 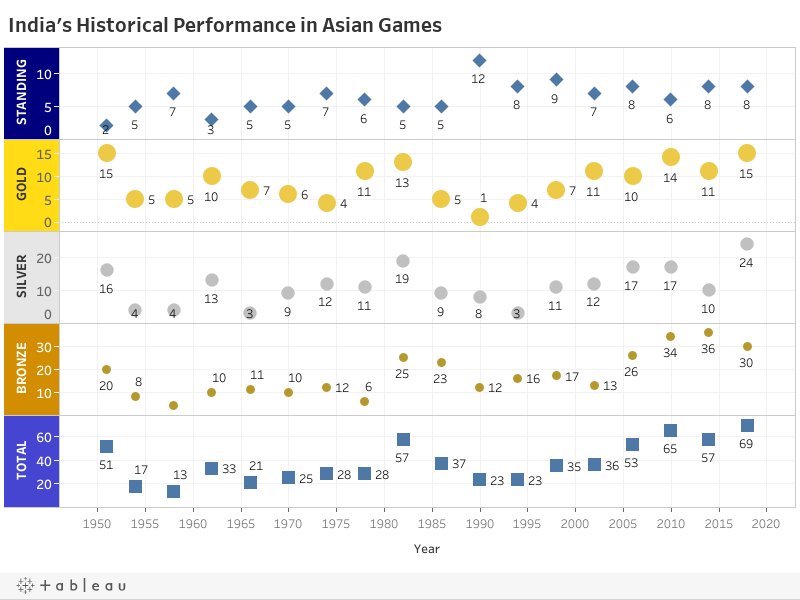 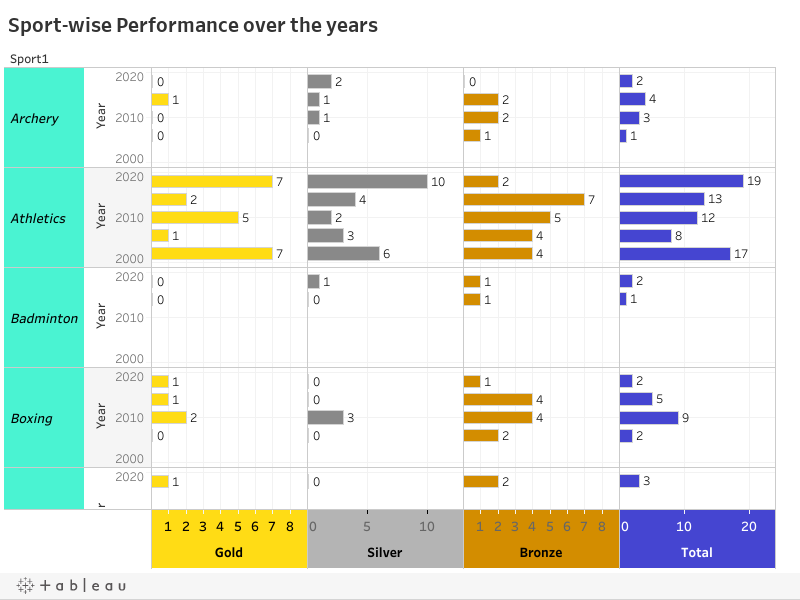 While the situation in Kerala after floods is certainly heart-moving and saddening, it is hard to believe that this is like an act of God that happened overnight. I clearly remember while working on some critical projects last year, we heard about a hurricane headed towards my employer’s offices in Tampa, Florida. A quick evacuation was ordered with ample amount of time to gather basic stuff and foods etc. Hurricane came and passed with no loss of human life and limited physical damage. 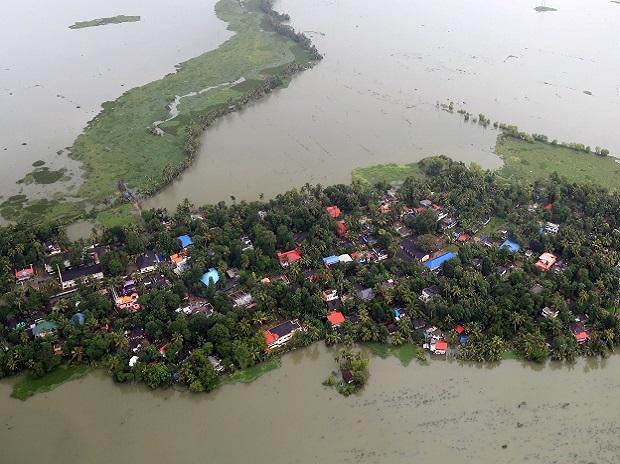 So, it is hard to believe that no prior notice came to the local authorities in Kerala before the calamity actually hit. It is equally hard to believe that all the early warning systems failed to help the cause. This is a pure human failure and one so perhaps manufactured due to an inefficient regime sitting for local administration there.

This is what Dr. Amita Singh, Professor for Disaster Management in JNU had to say (italics and highlights were not part of original text):

‘I just don’t understand how people seem to appreciate the state administration & the CM for apparent leadership, when they’ve failed the most fundamental test: NOT preventing of a preventable disaster.
This flood was not caused merely by excess rain; 40% excess precipitation over 3 months of monsoons cannot have caused this, nor is it a terrible outlier. This was caused by human blunder.
The Kerala state govt could’ve prevented it but didn’t have the foresight to. They knew the reservoirs were full by July. Scientifically reliable & freely available weather forecasting systems were predicting 2000 mm of additional precip in Aug. The first function of dams is as storage. The right thing to do with any storage system is to have a proper input & output prediction & management.
They could’ve had a warning system, water management system, looked at proper weather forecasting & released water in manageable quantum over a period of 15 to 20 days yet omitted to. They should’ve realized the danger a few weeks in advance (assuming they have cognizance & sobriety). Instead they waited till overflow & opened all the dam shutters at once. Instead of heavy but manageable drainage flow, we got a deluge. No surprise. In the middle of rains. It’s the people who have paid dearly, not the decision makers who make no decision actually. And it’s the best governed state – by which metric, I wonder?
Do not praise the ignorant for a superficial display of leadership in the relief after the disaster when they could’ve prevented it but did not & clearly are not capable of. If you elect fools, you will fall with their folly.
Be clear: it wasn’t nature or God. This was man. God has given man intelligence, wisdom & memory with which he has created superb technology & management systems. The disuse of wisdom, lack of observation & ignorance of the laws of nature, is not God’s fault. The crime of omission is far greater than that of commission.’

See the video here (if you dont understand Malyalam, wait for the English part):

Amidst the claims and counterclaims about the said Rs. 700 crore aid promised by UAE to Kerala, one only loses heart to the doing of some foolish people. It is very painful that the whole thing is being quite shamelessly politicised by the local regime. The UAE itself had to come out and make statement that it has offered help but no number is in the play.

One wonders if the things have gone so bad that some people took advantage and created their own funds on top of CM relief fund seeking out donations. One such was from IIM Kozhikode Alumni association. So much was the haste and desperation of this alumni group to seek funds that they used a personal gmail ID as their nodal contact point. Also, the account that was shared was a savings account. And when people questioned the person who posted this in multiple groups on whatsapp and telegram, the firebrand messenger, claimed that she has authenticated and this is all genuine. What she forgot to mention that she is the executive member of the same alumni association. No one knows whether and how these funds will be used. I hope it reaches its home.

Similarly for the CM fund, it is managed by the same people who originally took decision on management of the dam flood gates.

While the damage caused can never be repaired to bring it back to the original shape, one just hopes the administration does not create manage the relief fund and work better than how they managed the early warning signs of the floods.